Weather is often the most important thing to consider when planning a trip. You can choose the perfect destination, have the perfect itinerary but imperfect weather can derail all your best-laid plans. A little research into the weather condition can hence save you from a lot of regrets.

Seasonal changes in Bangkok is a bit different from what the non-tropical world experiences. It is broadly classified into two seasons- Wet & Dry. The best time to visit the Thai capital largely depends upon what you want from your Bangkok vacation. The city does not experience much variation in temperatures. It’s almost hot throughout the year.

April to June is the official summer season. The south-west monsoon hits Bangkok around mid-May. Bangkok experiences a major tourist outburst in between November to March. Each season has its charm and benefits. Here is an extensive Bangkok weather guide to help you decide on which is the best time for you to visit Bangkok.

Quick Links to the Information on This Page

The period coincides with winters in the west. This could be one of the reasons why a large number of tourists visit Bangkok during this season. Days have long stretches of sunshine, least amount of rainfall, and low humidity. The weather stays perfect, the only drawback of the season being the hike in the ticket and accommodation rates.

This is a good time to visit Bangkok if you wish to complete your trip with a visit to the southern islands. The weather stays ideal for you to explore the city on foot, however, you are bound to encounter tourist crowd in all major attraction sites. The crowd remains maximum during Christmas and New Year. Hence, it becomes essential that you make your bookings at least 3 months in advance. 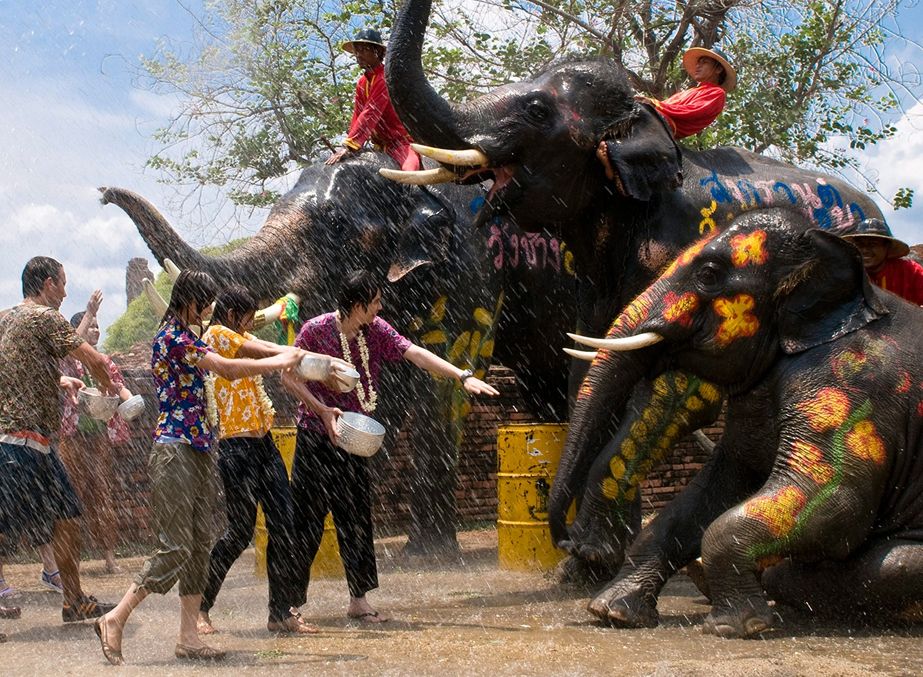 Summers in Bangkok see a thinner crowd. Though the tourist crowd is not as low as in the off-season, it’s still visibly less than the peak season. The temperature can even cross 40 degrees Celsius.

April is the hottest month of the year, it is also the time of Songkran the Thai New Year. Summers are a good time to visit Bangkok if you can withstand the heat. There are slight chances of rain in April. Monsoon arrives in Bangkok around mid-May. The tourist crowd starts getting thinner during May and June. Hotels and resorts start offering discounts.

The humidity during the summer season remains around 70%. Spending time in the water, taking a swim in the ocean seems inviting during this season. However, remember to keep yourself hydrated. Wear sunscreen and avoid spending too much time in direct sunlight. Take regular breaks and always carry a bottle of water with you. And, do not forget to book air-conditioned rooms.

October happens to be the tail end of the rainy season. Rain showers get lighter and there is plenty of sunshine. The major tourist crowd of the peak season is yet to arrive, which means that you can enjoy private tours and sightseeing. October is a great time to visit as the showers of rain keep the weather pleasant. You get to save a little on hotel bookings and flight tickets. Remember to look at the weather forecast before planning your trip.

Suggested Read: Things To Do In Bangkok 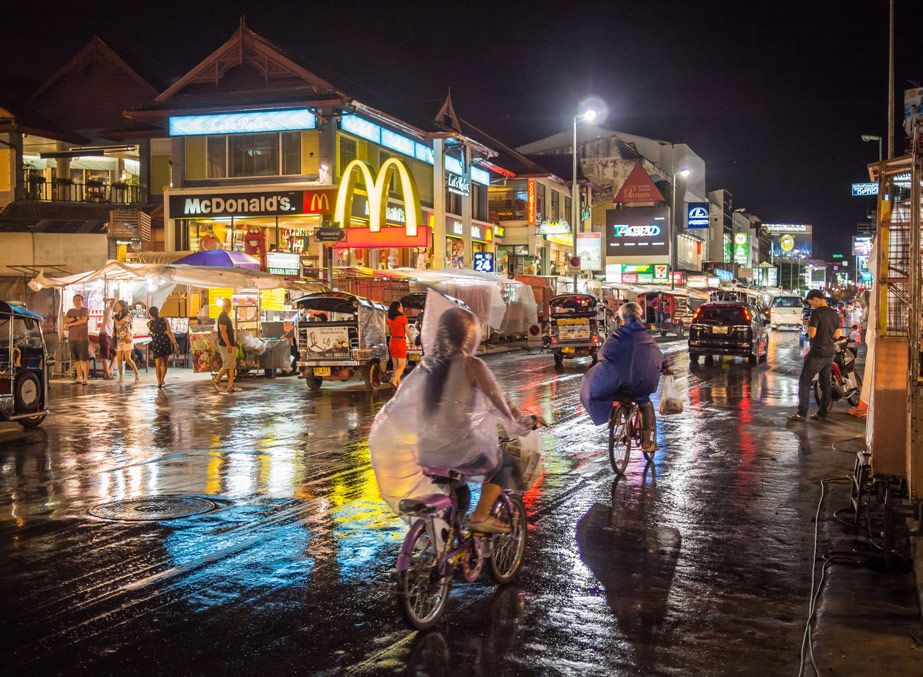 Off-season in Bangkok falls during the rainy season. The period experiences short but intense downpours. It usually rains for an hour or two during the late afternoon or evening. Also, the downpour is very localized. September happens to be the wettest month of the year.

The average temperature during the rainy season ranges from 26 degrees to 33 degrees Celsius. It is a good time to travel if you are looking for a low-budget vacation. The hotel and resorts offer almost 50% discount on peak-season prices. The tourist crowd during the off-season is a bare minimum.

Weather is still humid and the sky remains overcast. Though it hardly rains the entire day it would be wise to carry your raincoats and umbrellas. You should travel to Bangkok in the off-season if you are ready to take chances with the weather. If however, you are planning to take a once in a lifetime trip and have your heart set on a beach vacation then you might want to choose another season. 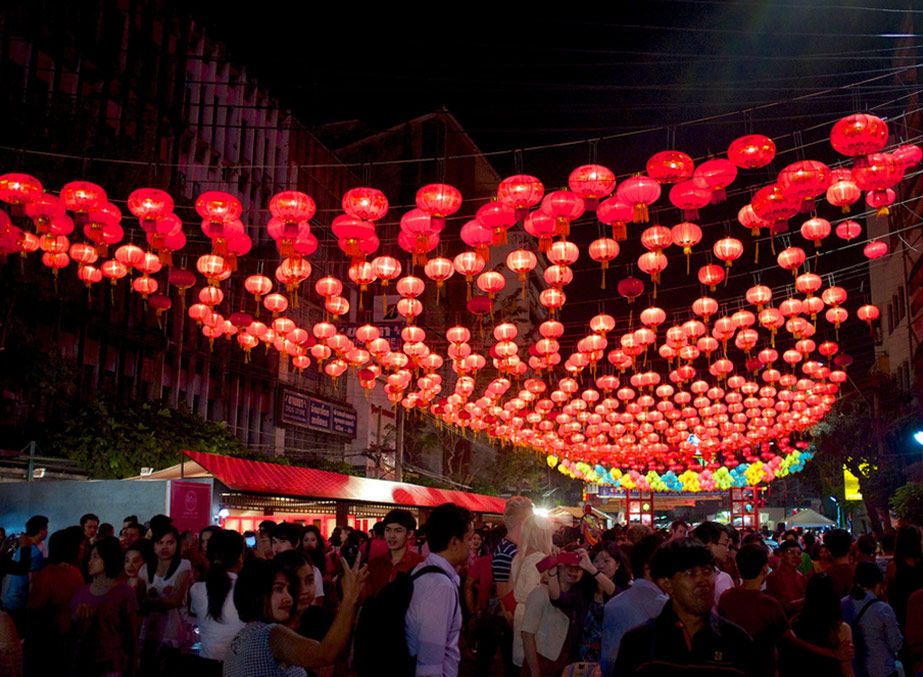 Weather– January has the perfect weather with plenty of sunshine and almost no overcast. It is one of the cooler months and has an average temperature of around 27 degrees Celsius. Humidity is comparatively low during this season. The sea remains warm and inviting. January also happens to be one of the busiest and priciest months of the year. Hence, making your booking at least 3 months in advance is a wise decision.

Why Visit– January is perfect as the tropical heat during this month is bearable, the weather is ideal, and no destination is off-limits. Chinese New Year can also fall in January. 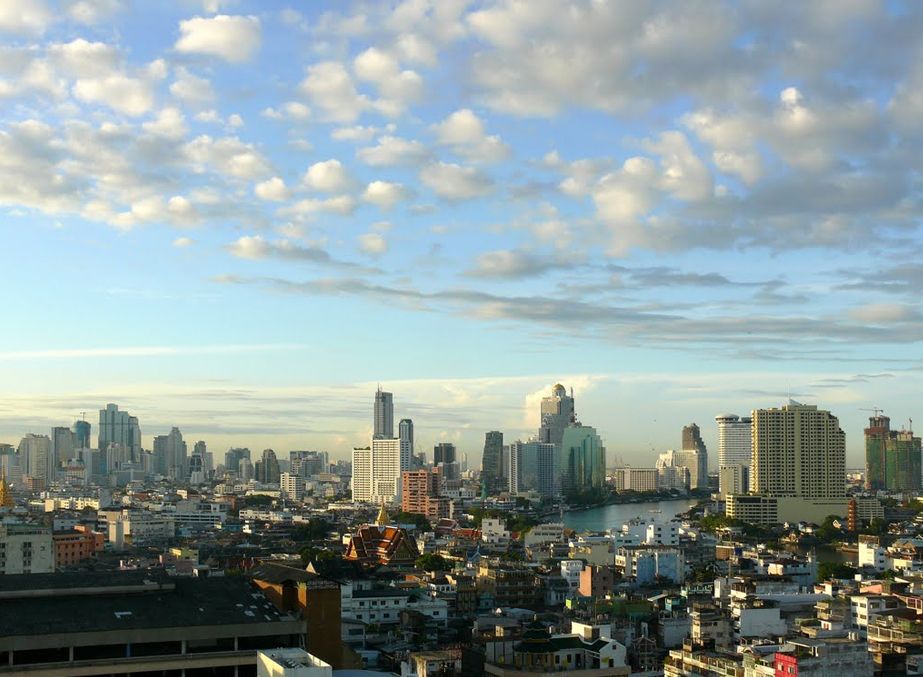 Weather– The weather conditions are very similar to January. Winters in Bangkok or Thailand as a whole is very different from that in the non-tropical countries. The temperature during the month remains between 23 degrees to 33 degrees Celsius. Humidity is slightly low as compared to the summer months and remains around 69%. February too sees very little downpour and hence sees high tourist footfall.

Why Visit– Dry and warm weather conditions. You can take tours and excursions to all the top tourist destinations.

Weather– By March, the weather in Bangkok starts to get slightly warmer. The average temperature ranges between 25 degrees to 34 degrees Celsius. March might see a few showers of rain here and there. The humidity starts to rise and is usually around 70%. You should pack a lot of light cotton clothes, wear sunscreen whenever under the sun, carry caps and sunglasses, and comfortable walking shoes are a must.

Why Visit– The weather is still ideal for exploring the city on foot. Good time for beach bumming and island visits. 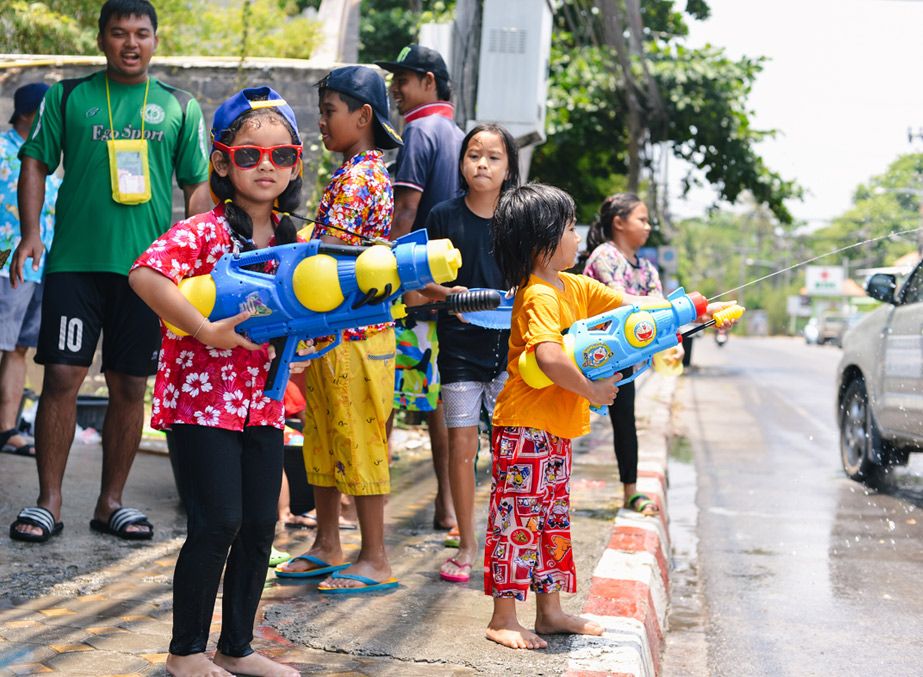 Weather– April marks the official start of summers. It has the highest average temperature that usually ranges between 26 degrees Celsius to 37 degrees Celsius. April receives slightly more rainfall than the previous months. The rain combined with high temperature makes the air more humid. The average humidity during the month is around 70%. Spending too much time under the sun during the summers can cause fatigue and heatstroke. If traveling to Bangkok during April you are advised to apply a lot of sunscreens and carry loads of water.

Why Visit– Songkran, The Thai New Year takes place from the 13th to the 15th of April. The three-day-long festival is celebrated with great enthusiasm in Bangkok. 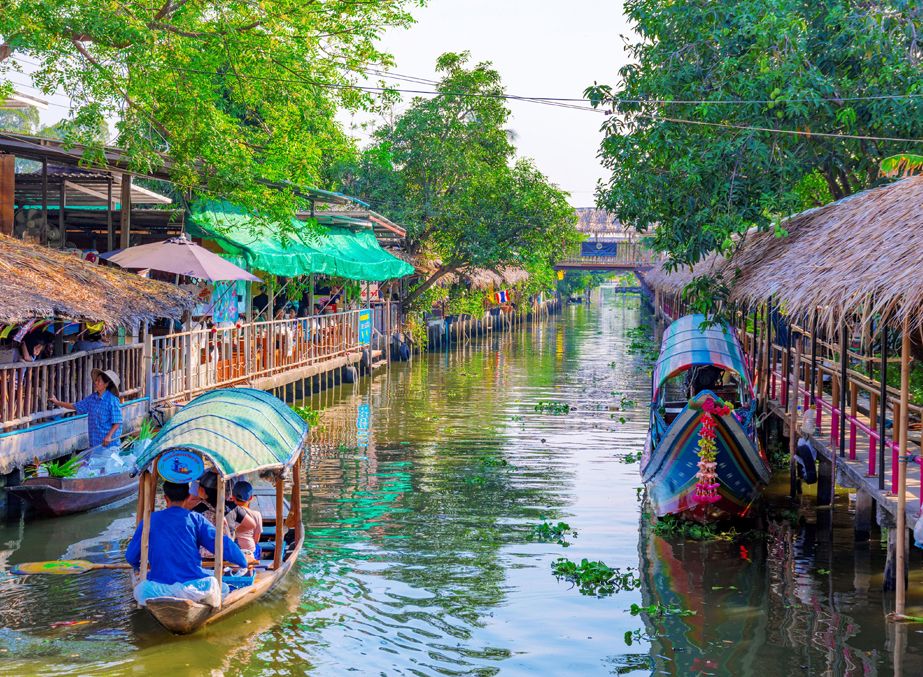 Weather– May is officially the start of the monsoon season. Downpour occurs in short bursts from mid-May. You might encounter floods in Bangkok during the initial monsoon weeks. However, there is plenty of sunshine and the downpour occurs for an hour or two during the day. The average temperature remains around 32 degrees Celsius. May can get extremely humid. Pack all light fabrics easy-to-dry clothes and an umbrella.

Why Visit-You get a good discount on hotel prices and airfare. It is a good month to travel if you are planning on a low-budget holiday. Weather– The weather conditions in June happens to be similar to May. The average temperature remains around 26 degrees to 33 degrees Celsius. Rain occurs in short intense bursts during the night. The downpour usually occurs for an hour or two, not enough to dampen your plans. Bangkok has several bars, shopping malls, and restaurants that can keep you engaged during the downpour. The overcast weather is nice for strolling but the rain causes a rise in humidity. The average humidity in June remains around 73%. Look-up the weather forecast before planning your trip.

Why Visit– Best discounts on hotel prices. You can even do your booking after arriving in Bangkok. The tourist crowd is extremely low. It is a good time to travel if you are looking for a low-budget and least-crowded vacation. Weather– July falls in the Off-Season when there is least number of tourists in Thailand. The average temperature drops a little and remains around 31 degrees Celsius. The weather is similar to May and June. Humidity remains around 73%. Rainy season in Thailand can be a bit unpredictable. The downpour usually occurs in late afternoon or evening in short but intense spurts.

Why Visit– Off-Season discounts on hotel prices. You can save upto 50% on your travel and accommodation. Weather– Rain occurs in short bursts but the downpour intensifies during August. You might encounter street flooding in Bangkok during the month. Humidity remains as high as 74%. The temperature remains between 26 degrees to 33 degrees Celsius. Contrary to popular belief, it does not rain the whole day. This means you can still indulge in outdoor activities. However, beaches might be off-limits during August.

Why Visit– Enjoy plenty of discounts and really less crowd. 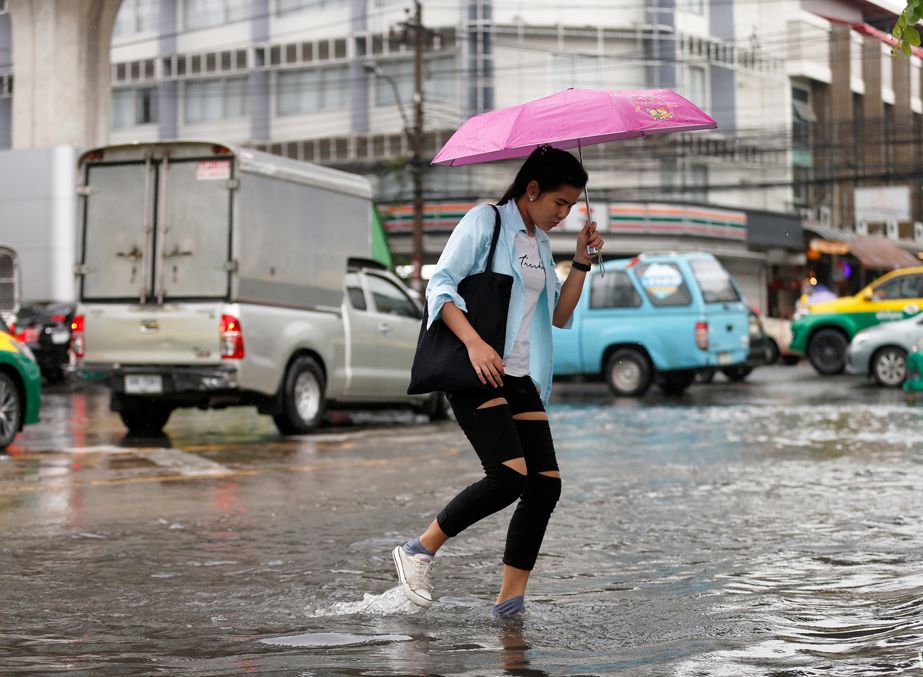 Weather– September is the rainiest month of the year. The average temperature during the month falls to 29 degrees Celsius. Occasional sunshine and heavy downpour results in high humidity which remains around 77%. Pack all light and easy-to-dry clothes. If you are looking for a beach vacation then September will not be an ideal month.

Why Visit-Lowest hotel and airfares. Tour groups are smaller and you can have private tours of the city’s major attractions without having to brush your elbows with fellow tourists. 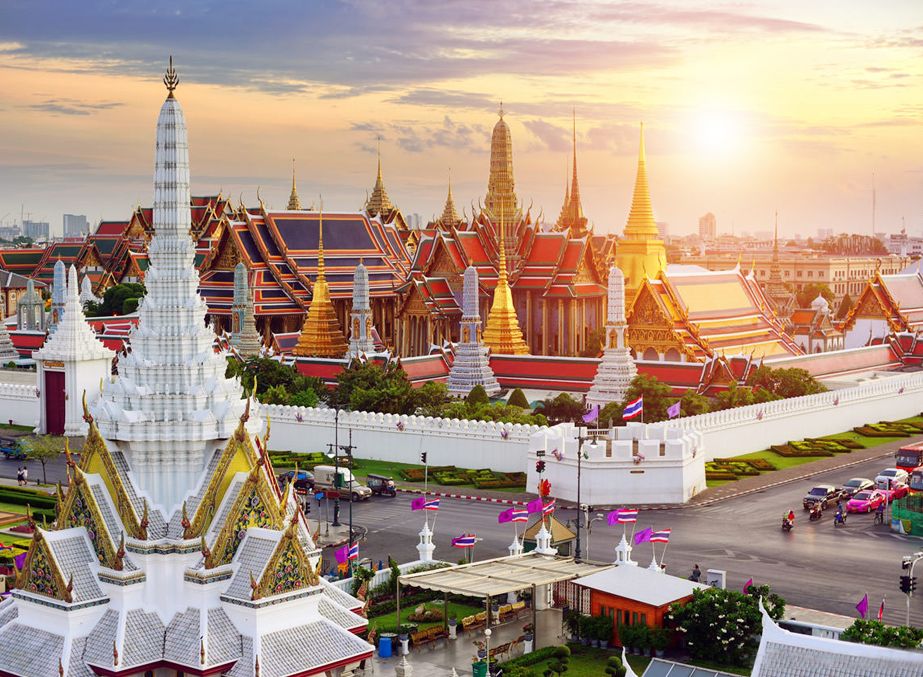 Weather– October comes at the tail-end of monsoon and Off-season. The average temperature during the month remains around 25 degrees to 32 degrees Celsius. Humidity drops a little and is around 74%. Downpour gets lighter during the month. You have bright sunshine for most parts of the day. The weather is pleasant with fewer chances of rain. However, pack as you would for September keeping raincoats and umbrellas to stay on the safer side.

Why Visit– The weather is pleasant during October with lower hotel prices and the peak season crowd yet to arrive. 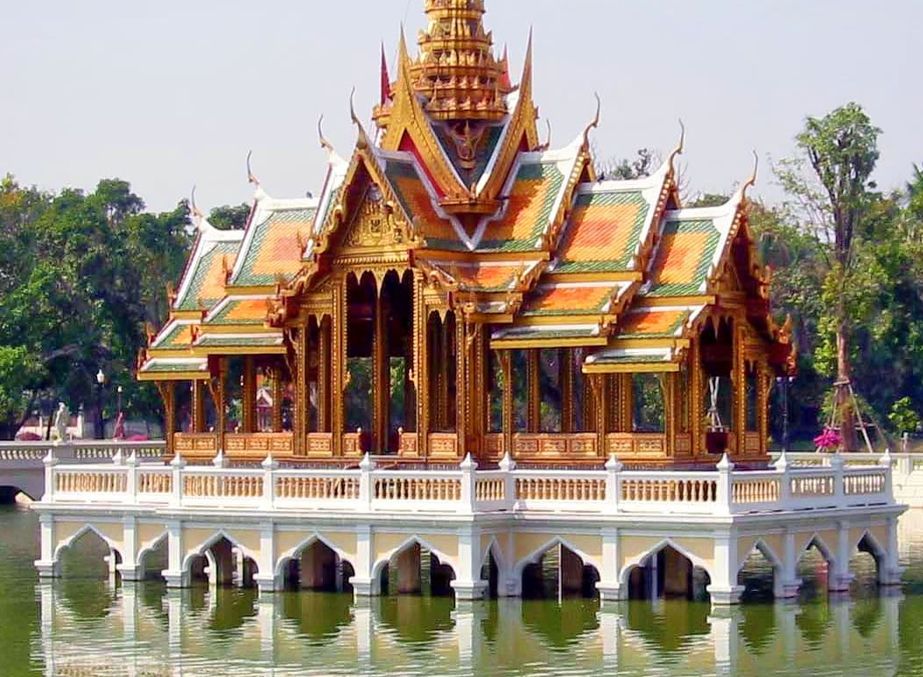 Weather– November marks the start of the peak-season. Bangkok is drying out of the Monsoon season and receives plenty of sunshine with very little chances of rain. The temperature drops to around 24 degrees to 31 degrees Celsius. November is also the start of the cool season in Bangkok. Winters in Thailand is warm and comfortable. The period is ideal for beach and island vacations. Pack light jackets as the evenings and early mornings can get a bit cooler. Humidity starts to drop and is around 67%.

Why Visit– The weather is ideal and perfect for all sightseeing tours. It’s best to arrive in the initial weeks to avoid the peak-season crowd and avail some discounts on hotel prices. 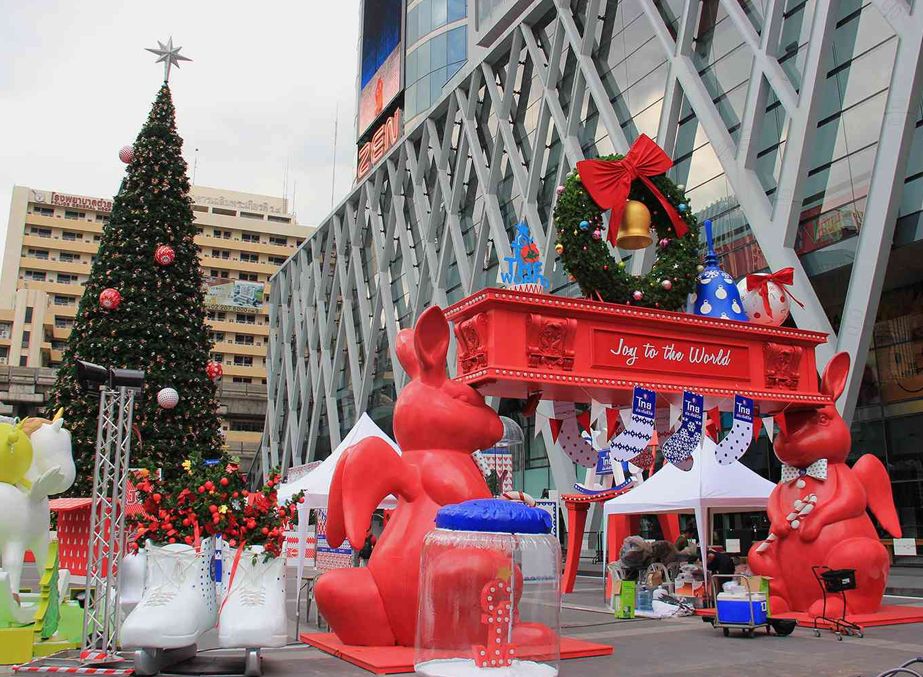 Why Visit– Bangkok is one of the best places to celebrate Christmas and New Year. If however, you wish to avoid the tourist crowd then you should visit during the starting of the month. Make your booking for at least three months in advance to avail of the best hotel rooms.