The calm and bliss of northern Thailand is something worth beholding when in Chiang Mai. The city which is now modern and bustling radiates an ancient hue. The city boasts a lush green landscape and offers a wide range of activities which you can enjoy in different seasons. Chiang Mai is one of those places which can be explored in any season.

Traditionally anytime between October and April is the best time to visit the city. Most of the tourists visit Chiang Mai in the season to enjoy its pleasant weather. It would also be great to visit Chiang Mai during one of its many colorful festivals.

Here is an extensive monthly weather guide to help you decide which is the best time for you to visit Chiang Mai.

The breeze remains cool but not chilly and dry. Carry light jackets and woolen clothes. Accommodation prices during the season start to rise with the influx of the tourist crowd.

November in Chiang Mai is the time for Loi Krathong Festival. December and January are two of the busiest months in Chiang Mai. February is popular among tourists for the Lantern Festival and Flower Festival.

During the rainy season, Chaing Mai sees fewer tourists. People who hate to take chances with the weather usually avoid monsoon in Chiang Mai. Monsoon hits Chiang Mai by May, it gets more intense by June. Northern parts of Thailand receive much less rainfall as compared to Southern parts.

Most hotels and stays start offering discounts on their peak season prices. This is a good time for a budget holiday trip. Make sure you carry raincoats, umbrellas, and good rain shoes when visiting.

Off-Season- March to May 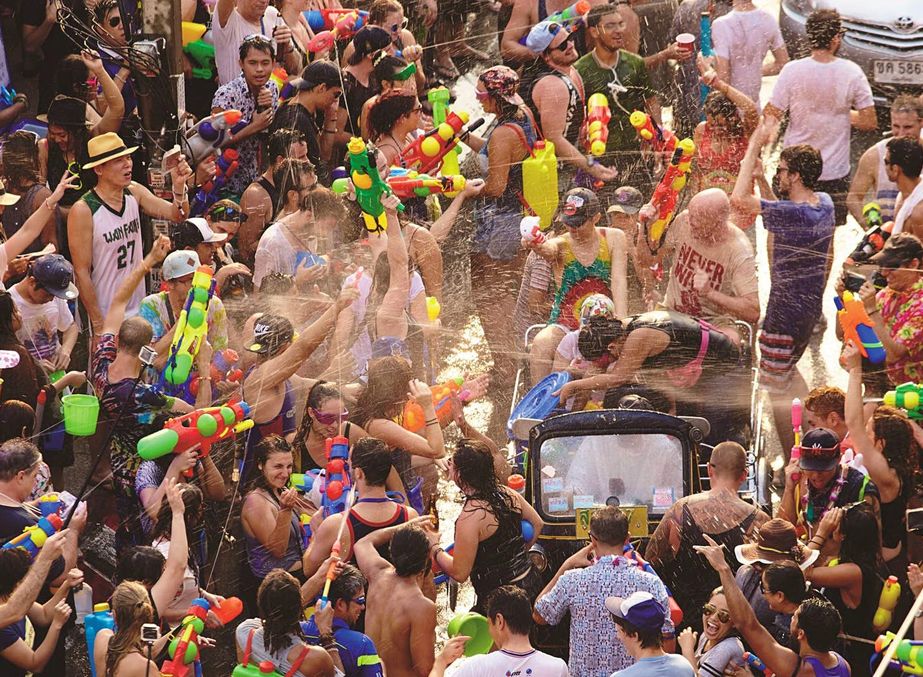 Summers in Chiang Mai is quite hot. Hence, most tourists avoid visiting during this season. The average temperature soars up to 36 degrees Celsius. Hotel prices are the lowest during the season. You can save up to 50% of your travel and hotel bookings.

April is the hottest month of the year followed by May. The temperature can easily reach 40 degrees Celsius. Humidity is also high during the season. Afternoons are mostly spent in pools. You can explore the city after sunset to avoid heat strokes.

Thailand celebrates Songkran, Thai New Year, from 13th to 15th April. The street water fights are a relief from the scorching heat during the day. Chiang Mai remains bathed in celebrations for a whole week. Many tourists visit Chiang Mai particularly in this period to enjoy the festivities others avoid it due to the crowd.

The summer is a good time to plan your trip to Chiang Mai if you are looking for a low-budget holiday. Pack all light fabrics clothes, cotton shorts, T-shirts, sunglasses, sunscreen, and hat. Chiang Mai has a lot of temples. Make sure you pack clothes that are appropriate to be worn in a Thai temple.

Why Visit- January has the perfect weather for exploring the city. It is also the time for Bo Sang Umbrella Festival and Cherry Blossoms viewing. 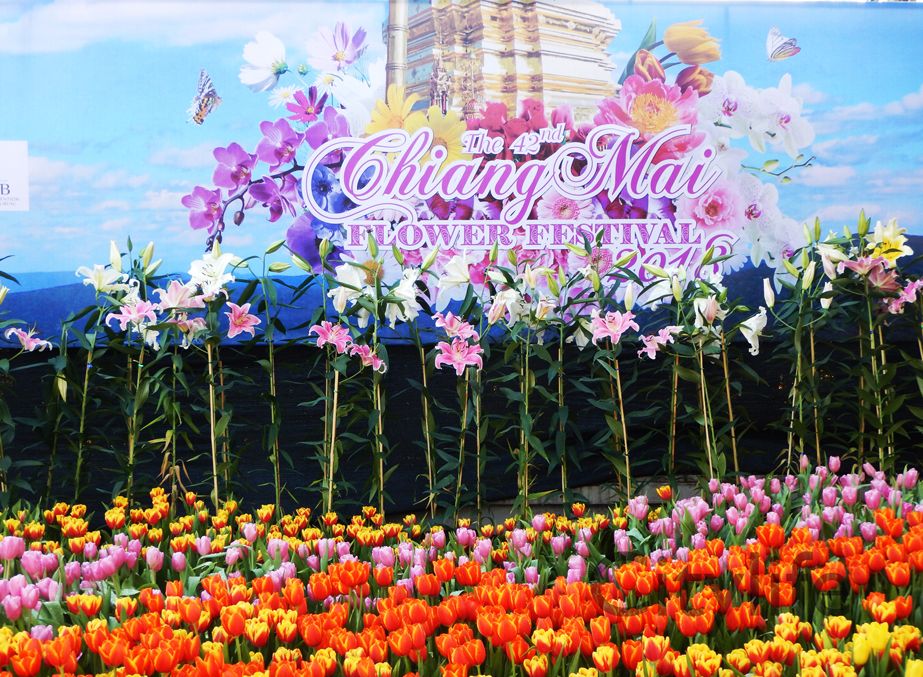 Why Visit- Besides the fine weather conditions February is also the time for the famous Chiang Mai Flower Festival.

Weather- March is the starting of the low tourist season. The temperature starts to rise by February. The average temperature during the day usually stays about 30 degrees Celsius. March is also the peak of the Burning Season in the north. The entire city remains foggy. Thai farmers set the forest on fire to plant cash crops and corn. Chiang Mai is surrounded by mountains and hills which traps the smoke in the valley. Farmers set the corn stalks and rice straws from the previous year on fire to prepare for the coming planting season. The smoke can be harmful to young children, elderly people, and anyone who is suffering from Asthma.

Why Visit- Hotel and flight are extremely cheap. Wearing air masks are important whenever out. Book hotel and resorts with room air purifiers.

Why Visit- Chiang Mai is one of the best places to celebrate Songkran, the Thai New Year. The three days long festival from 13th April to 15th April is celebrated with great enthusiasm in the city. 13th April also happens to be the hottest day of the year. The street water fights bring relief from the scorching heat.

Weather- The weather is similar to April. The temperature is still high. The average temperature during the day remains around 36 degrees Celsius. You can expect a little rain.

Why Visit- The burning season has completely retreat which means clear air. Hotels and flight tickets are almost half of what it is in the peak season. 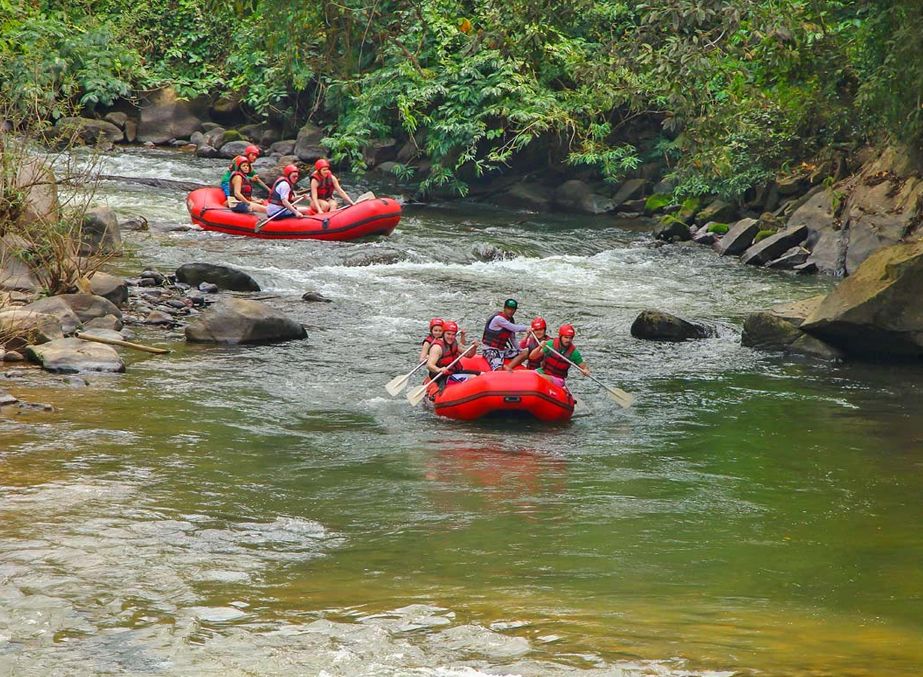 Weather- Monsoon starts in Chiang Mai by mid-May. It picks up the intensity by June. The first week can still be a bit hot with temperatures around 35 degrees Celsius. The rain showers are hence reliving. It is very rare for it to ruin an entire day. The average temperature during the month stays around 27 degrees to 32 degrees Celsius. Carry your raincoats or ponchos with you.

Why Visit- The temperature fall during the month compared to the scorching summer season. Most hotels and resorts offer a discount on their peak season price. It is a good time to go for water rafting. 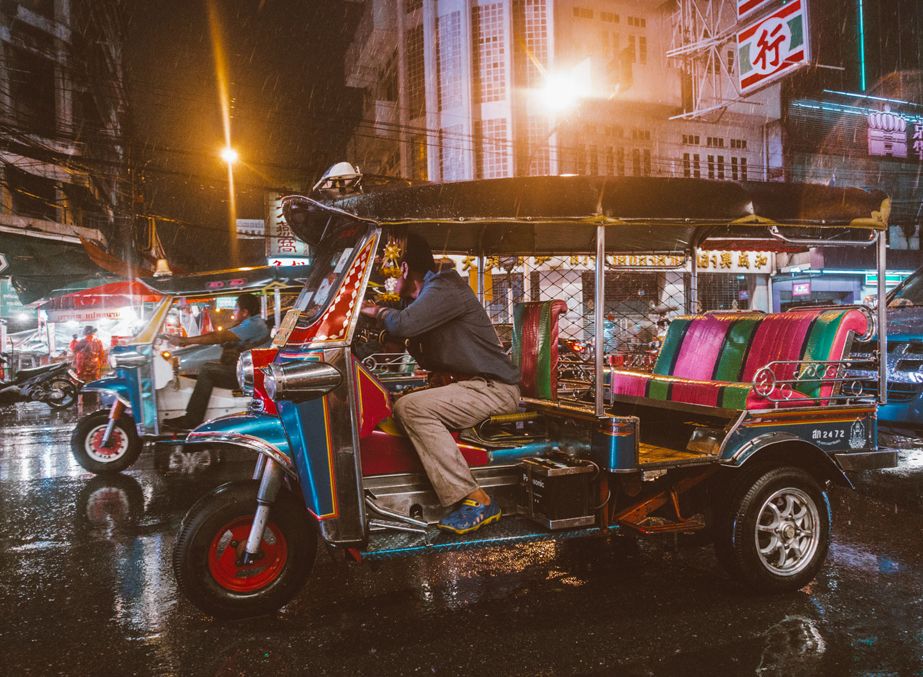 Weather- July is similar to June in terms of the weather conditions. The rain can be quite unpredictable. It mostly rains for an hour or 30 minutes. The downpour usually occurs during the afternoon or late at night. Rain brings the temperature down to around 32 degrees Celsius. The air remains humid.

Why Visit- One of the best months for enjoying the less-crowded low-budget vacation. 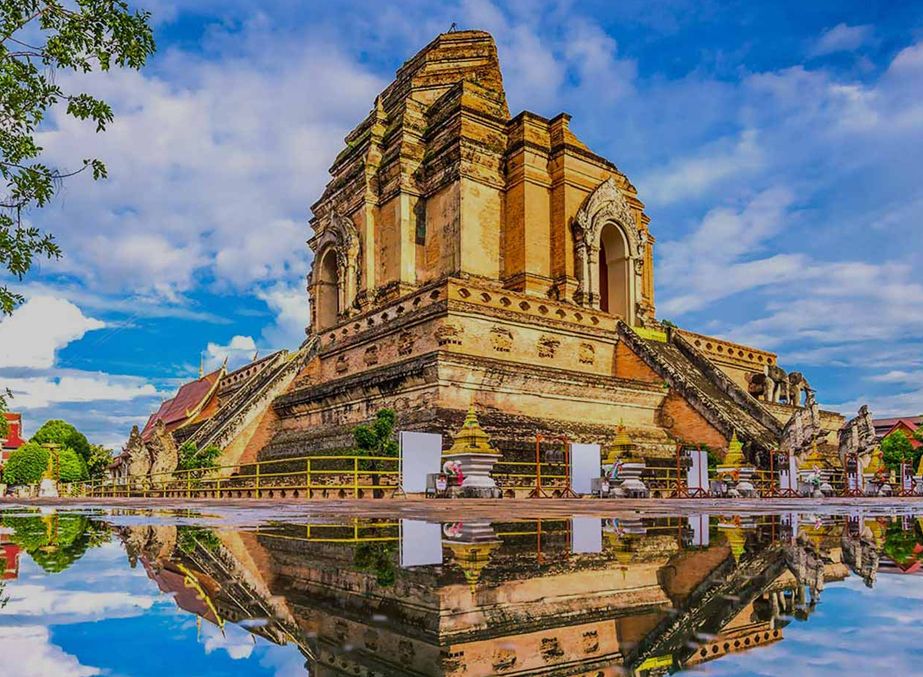 Weather- July and August are the wettest months of the year. The average temperature falls further to 31 degrees Celsius. It does not rain every day but it is fair to say it rains most days. It can be quite humid.

Why Visit- It is one of the best times to enjoy a quiet and peaceful vacation.

Weather- September is quite similar to other monsoon months. The temperature during the month remains around 22 degrees Celsius to 32 degrees Celsius. Though it would not necessarily rain every day you can expect a fair amount of rainy days. It usually rains for an hour or two during the entire day. The downpour cleans the air and makes the weather cool.

Why Visit- The weather is pleasant. If you are ready to take a chance with the weather then September is the best month to visit and save almost 50% on your travel and accommodation bookings. 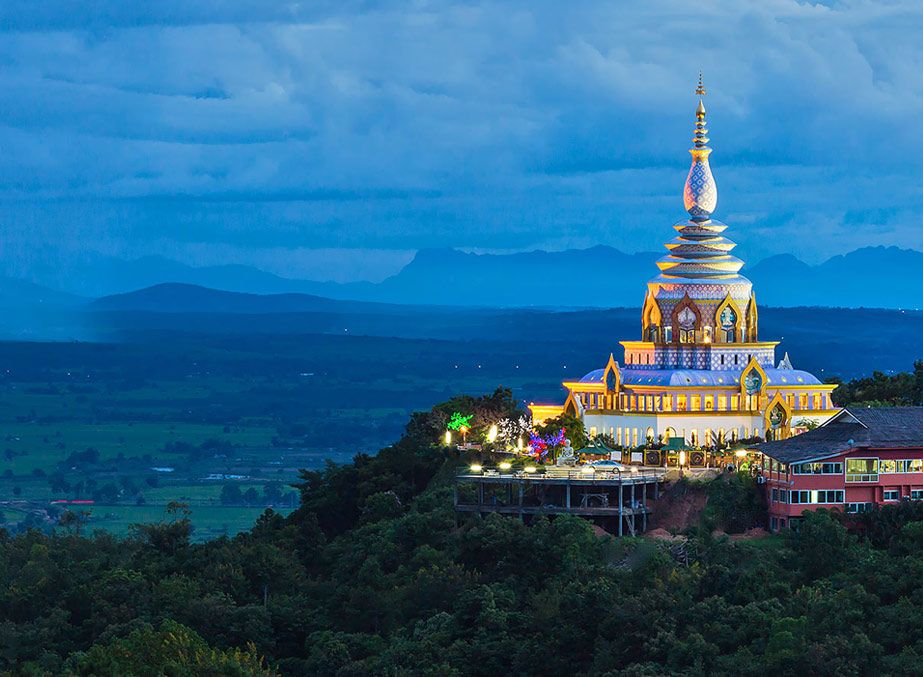 Weather- October is the tail-end of the monsoon months. You can expect a few showers here and there that occurs mostly during the night. You can expect a couple of sunny and dry days. The weather mostly remains cool. The temperature down to 21 degrees Celsius.

Why Visit- The rain showers reduce but the weather stays pleasant. You can still avail of discounts on your travel and hotel bookings. 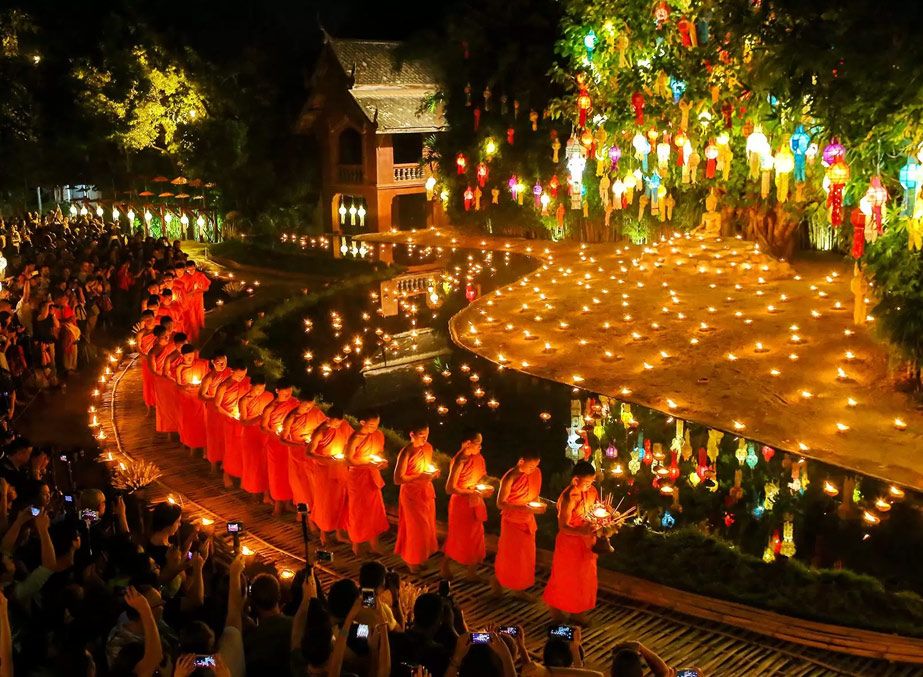 Weather- November is the start of the peak season in Chiang Mai. The temperature remains between 18 degrees Celsius to 30 degrees Celsius. Hotels start getting booked hence it is best to make your travel and accommodations booking a couple of months in advance.

Why Visit- Besides pleasant weather, November is also the month for Loy Krathong, the famous Siamese festival. 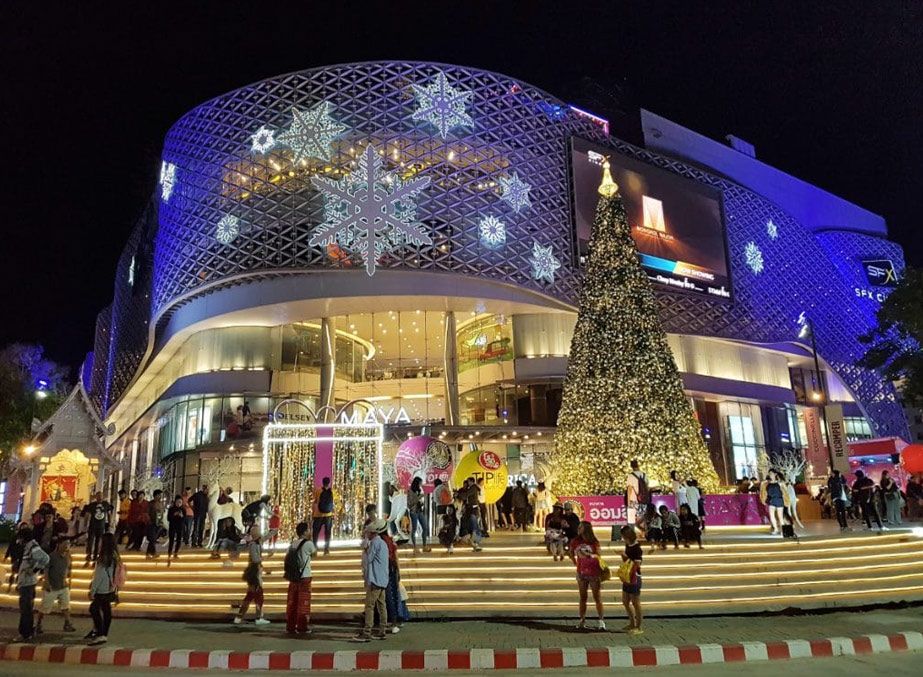 Weather- One of the busiest months in Chiang Mai. The city remains flooded with tourists. The weather in December is extremely pleasant. The temperature during the month ranges between 15 degrees Celsius to 29 degrees Celsius. The sky mostly stays clear as December is one of the dry months in Chiang Mai. Pack some light jackets and long trousers as the evenings can get cool and breezy.

Why Visit- Chiang Mai is one of the most popular destinations in Thailand to celebrate Christmas and New Years’.