The period from November to April is ideal for visiting Phuket. When planning for a vacation in Phuket, people have their minds set on beach bumming and water sports. The dry season which starts in November is the best time to indulge in all kinds of outdoor activities. Phuket has a tropical climate. Which means it remains hot throughout the year. The temperature during the dry season range from 25 degrees to 32 degrees celsius. It makes the weather stays comfortably warm but not too hot to allow you to explore Phuket as much as you like.

Quick Links to the Information on This Page 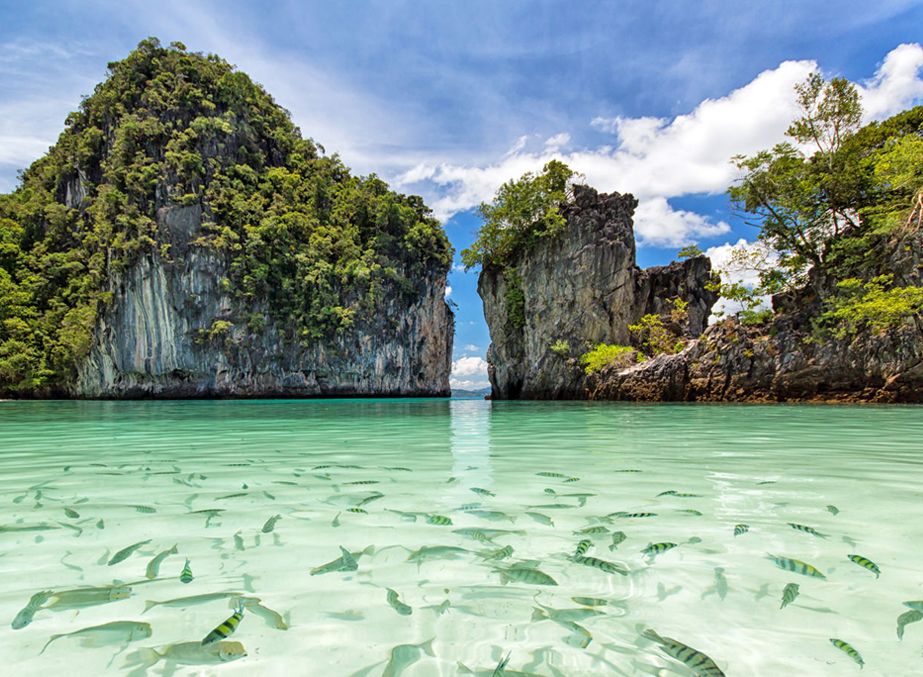 Peak Season kicks in during winters in Phuket. It is the best time to visit the island. There are hardly any downpours, the sky stays clear, and the weather comfortable. Cool breezes and low humidity makes it perfect for beaches explorations, island hopping, and sightseeing. The ocean stays calm as compared to monsoon season making it ideal for water sports. December is the coldest month of the season and January being the busiest. With the onset of the tourist crowd, the nightlife reaches its full-swing.

Thailand sees a major tourist outburst during December, January, and February. The ticket and accommodation prices also see a major hike. Best hotels get fully booked several months in advance. It is advisable to plan your travels and booking at least three months before the peak season. 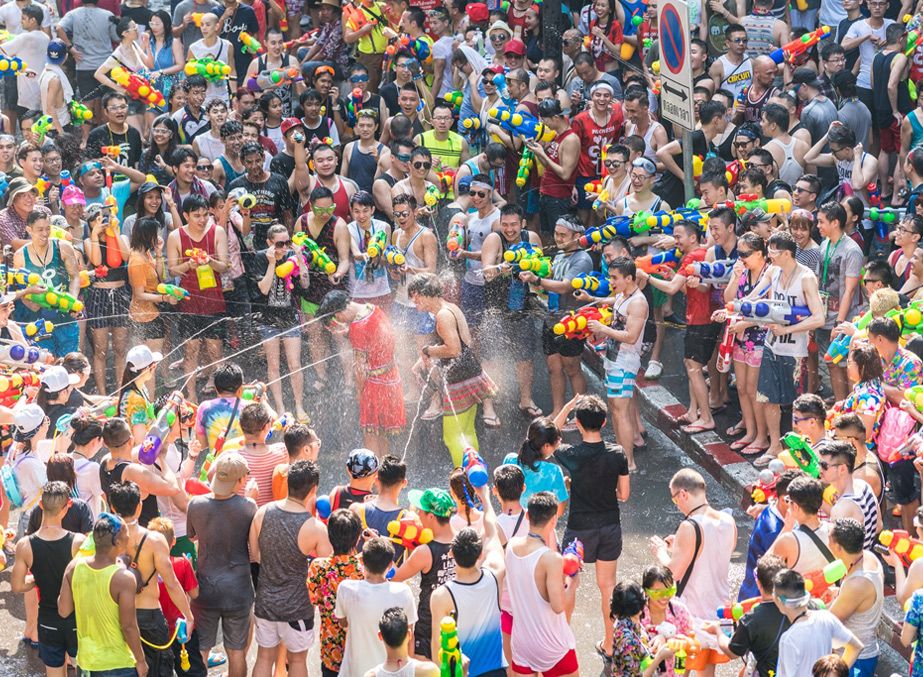 The summer season is accompanied by a rise in temperature and a fall in the tourist population. April is the month of Songkran or the Thai New Year. April 13th to 15th is marked by festivities in Phuket and the whole of Thailand. Songkran officially marks the end of peak season.

April and May are the hottest months. Temperature can reach up to 32 degrees Celsius and more. South-west monsoon hits the coast of Phuket by mid-May. There are short spurts of rain and ample sunshine. November marks the end of the rainy season and the beginning of the tourist season. April, May, and November witness thinner crowd results and lower hotel rates. It is a great time to visit Phuket if you are planning for a budget-friendly vacation.

Suggested Read: Things To Do in Phuket 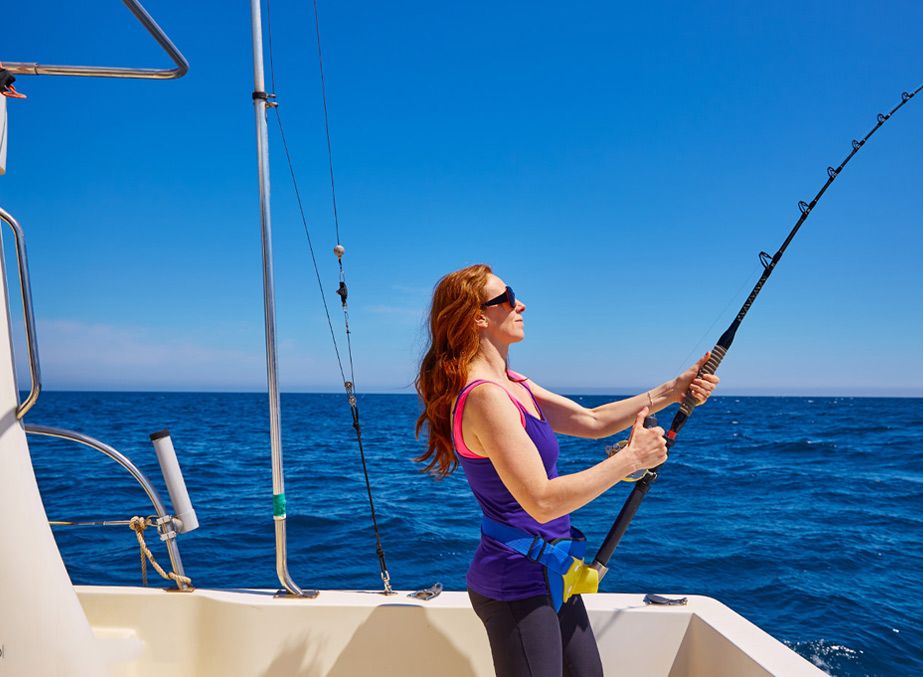 June marks the advent of the rainy season officially. The downpour takes place in short intense spurts with fair chances of sunshine. There is a major downfall in the tourist footfall. September is the wettest month of the year. Water sports activities like scuba diving should be avoided due to rough weather conditions.

The temperature remains around 32 degrees Celsius. The tourist groups are smaller during this period which means friendlier and more private service. Hotel and ticket prices are at its lowest. Some beaches and resorts might stay closed during this period. The south-west monsoon starts retreating by October. It is a great time for indulging in activities like fishing as the rain causes fish to come out of hiding. It is the best time to visit Phuket if you are planning on a low-budget least crowded vacation. 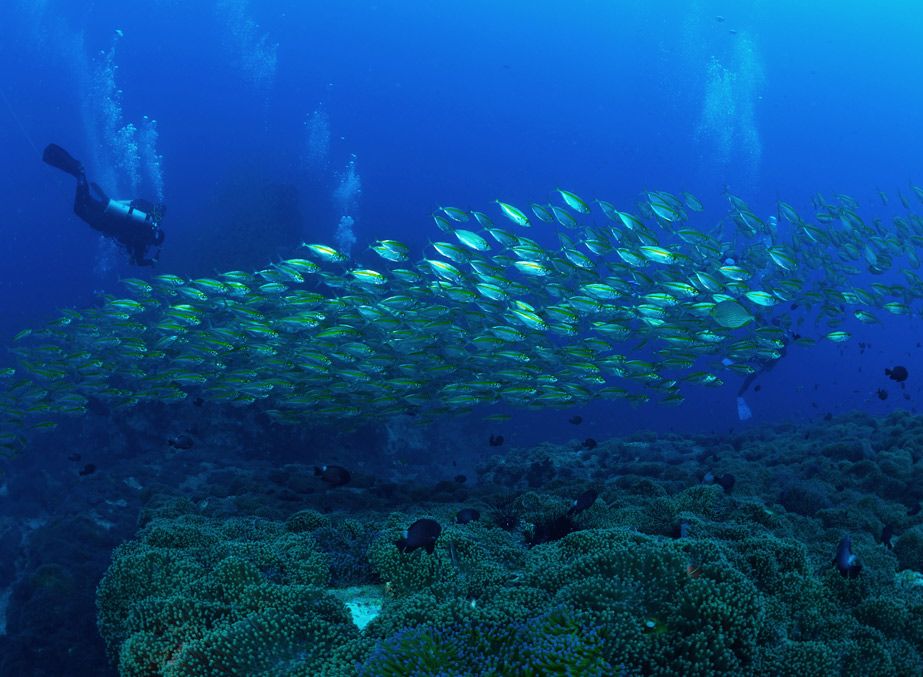 Weather– Phuket is close to the equator and hence does not have many variations in the temperature. However, the amount of rainfall does vary. January is one of the dry months with almost no rainfall. The temperature varies between 22 degrees to 32 degrees celsius. Days are characterized by lengthy sunshine hours and the sea remains calm. The weather is comfortably warm. It is one of the busiest months in Phuket. If you are planning to visit Phuket in January make sure you book tickets and accommodations months in advance.

Why Visit– It is the best time for scuba diving and watersports activities. January has the most pleasant weather conditions in the year. Humidity level drops making it ideal for sightseeing, island hopping, beach bumming, and more.

Suggested Read: Places To Visit & Things To Do in Phuket in January 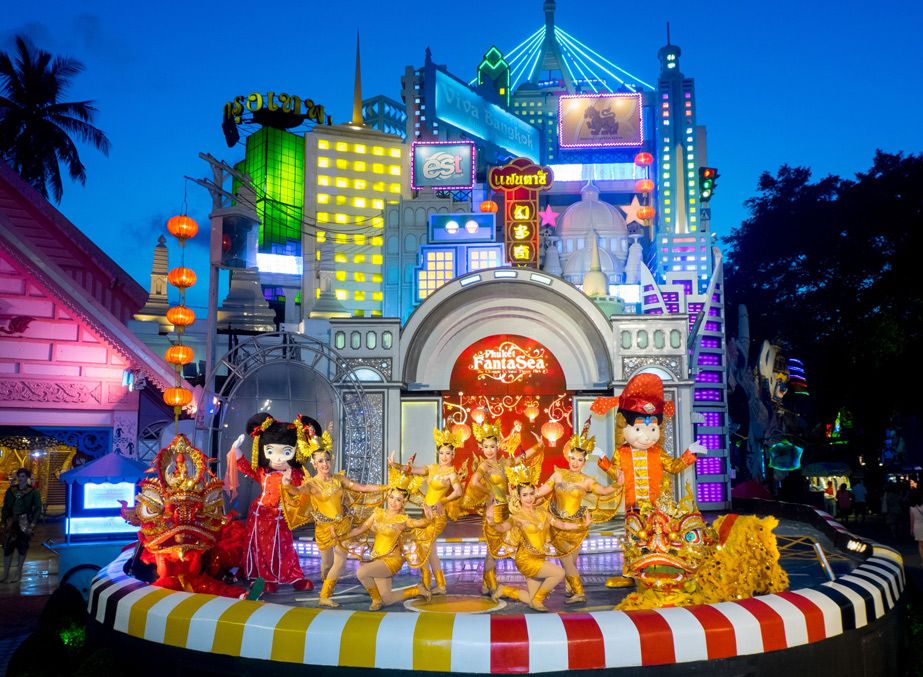 Weather– February is the driest month of the year with little to no rainfall. The temperature remains around 28 degrees Celsius. The weather is at its best with humidity ranging between 63%-75 %. It is also one of the busiest months in Phuket. Hotel rates are still high so book 2-3 months in advance this can save up to 35%.

Why Visit– Best weather for sightseeing and island hopping. Usually, February is also the month for The Chinese New Year. There are festivities and celebrations through Phuket during the New Year, especially in Phuket Old Town. The inhabitants’ old Chinese community on the island prepares for the two days celebration. Sino-Portuguese quarters are the hotspot for entertainment. The street of Phuket is adorned with Dragon Procession and other forms of entertainment.

Suggested Read: Places To Visit & Things To Do in Phuket in February

Weather– March is the tail end of the cool and dry season. The temperature starts to rise, ranging between 29 degrees to 34 degrees Celsius. The sky is mostly clear and days sunny. The peak season tourist crowd starts to thin a little. A few hotels start to offer discounts on their rates. It is the best time to enjoy the sunny side of Phuket, with fewer crowds, and lesser rates.

Why Visit– The best time to indulge in water sports activities like Snorkelling. Thao Thep Festival, one of Phuket’s major festivals, takes place on 13th March every year. The festival celebrates the victory of Phuket over the Burmese Army. Several festivities and sports tournaments take place during the two weeks which includes takraw, bicycle racing, mini-marathons, and more.

Suggested Read: Places To Visit & Things To Do in Phuket in March 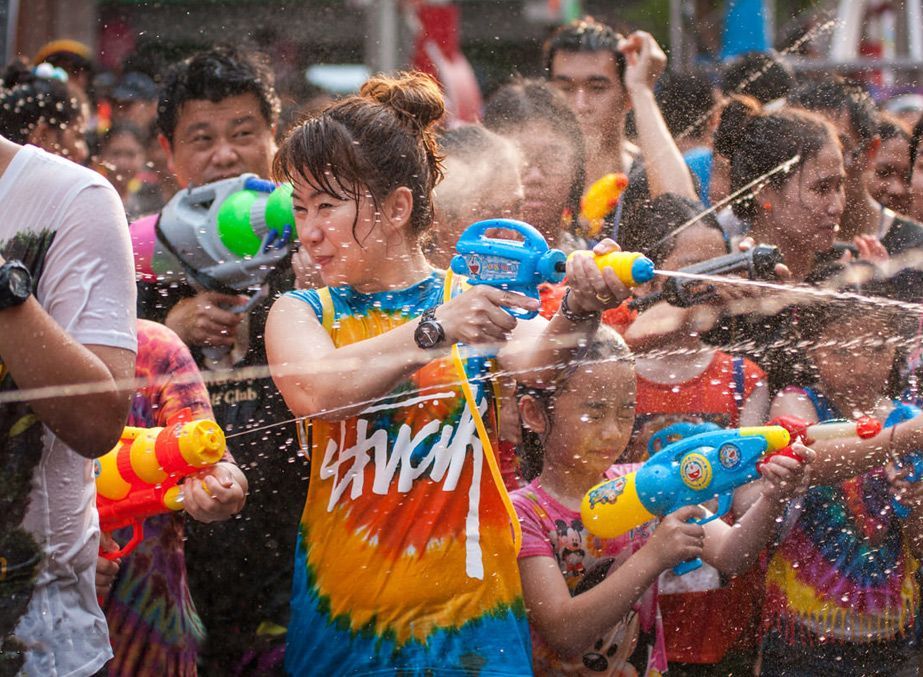 Weather– April marks the onset of summers. The temperature starts to peak. The average temperature during the day is usually 29 degrees celsius and can reach up to 34 degrees celsius. It is a great time to visit Phuket if you don’t mind the heat. Rain can occur during the evening in short bursts. It offers a great respite from the heat. You can indulge in island hopping, beach bumming, swimming, and all other kinds of water sports.

Why Visit– Songkran, The Thai New Year falls between 13th to 15th April. The whole of Phuket remains bathed in celebrations. Street water fights, parties, and celebrations. A great time has a closer look at Thai culture and traditions.

Suggested Read: Places To Visit & Things To Do in Phuket in April 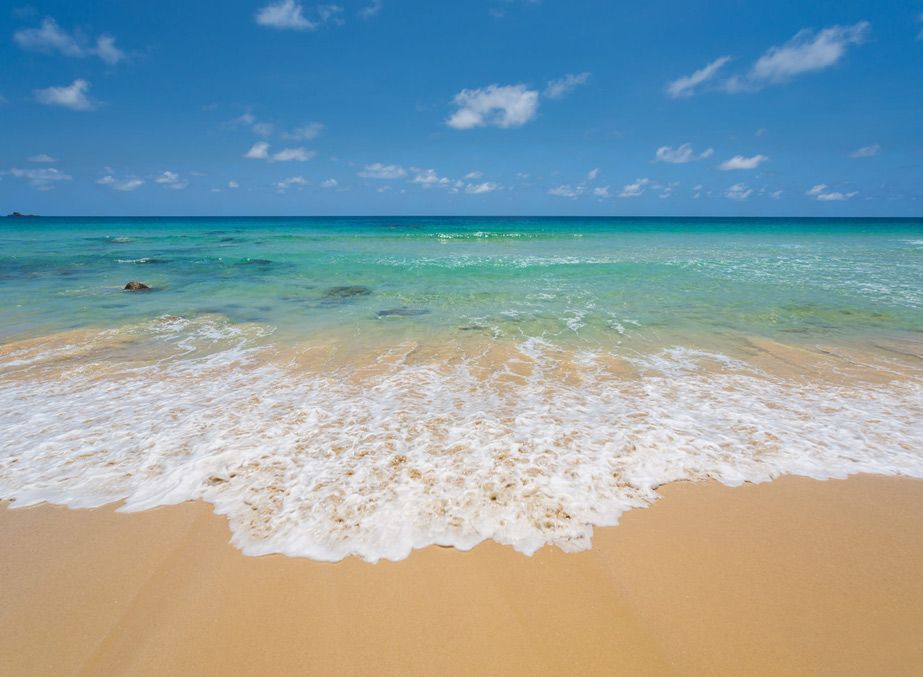 Weather– May is the onset of the rainy season. The first half of the month is usually better. The downpour pickups up speed and frequency from mid-May. The temperature remains around 29 degrees celsius. The humidity rises with an increase in the amount of rainfall. Nights can be bit sweaty but the island’s resorts are all air-conditioned.

Why Visit- Hotel and flight rates are lower and it is also the start of the surfing season.

Suggested Read: Places To Visit & Things To Do in Phuket in May 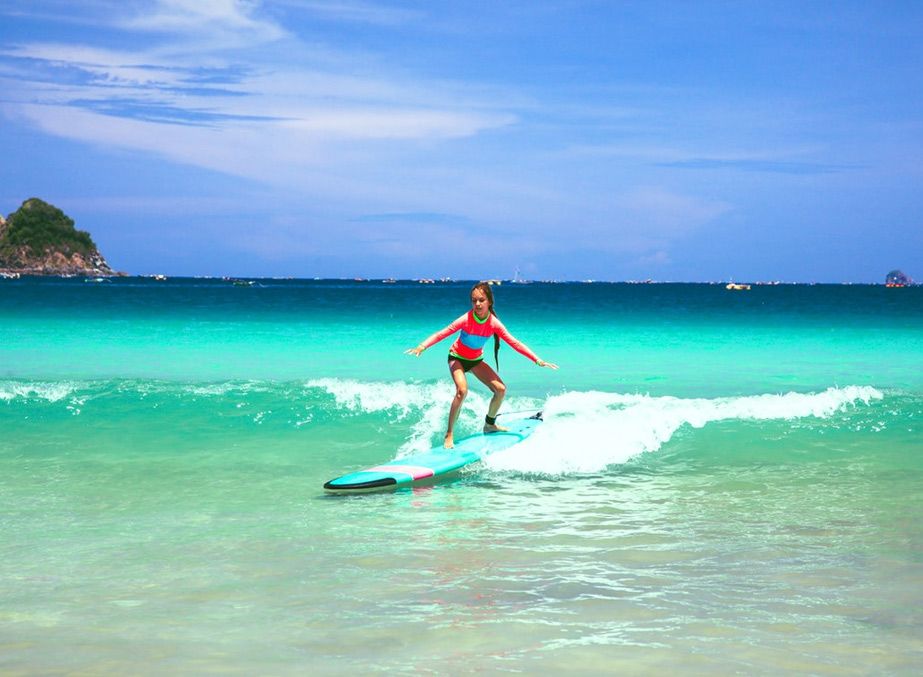 Weather– The monsoon season has officially started. The amount of rainfall increases from that in May. But, still, it is in short bursts. The average temperature falls to 28 degrees celsius. The seas are usually calm but not good for swimming or snorkeling. June is the start of the low season and very few tourist crowds can be spotted on the island.

Why Visit– It is a great time for surfing. Hotel prices start to see a major drop as compared to the peak season. Best time to enjoy a budget-friendly, less-crowded vacation.

Suggested Read: Places To Visit & Things To Do in Phuket in June

Weather– Phuket’s weather conditions in July can be a bit unpredictable. Usually, it is a few heavy bursts of rain accompanied by ample sunshine in between. The average temperature falls to 27 degrees Celsius. You would have ample time for sightseeing. Usually, Patong and Kata Beach are safe and open for tourists as compared to Karon Beach. Only if you have rotten luck will you encounter continues rain showers for a couple of days. You should look-up the weather forecast before making your bookings.

Why Visit– Hotel and flight rates drop to almost half of the peak season rates. The crowd is minimal. Best time to enjoy the island all to yourself.

Suggested Read: Places To Visit & Things To Do in Phuket in July 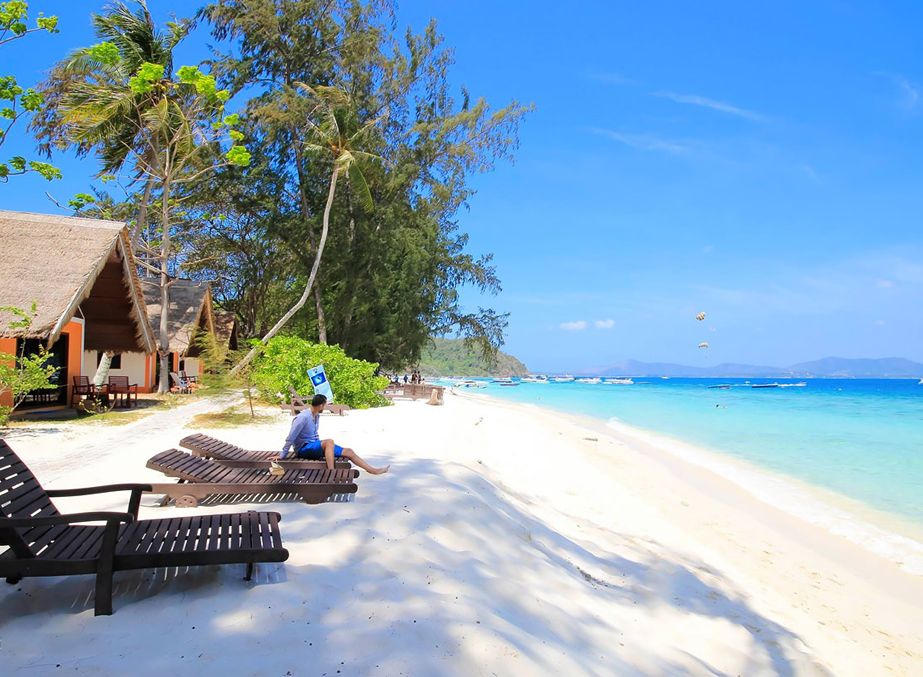 Weather– Much like June and July, August to sees intense rain shower in short bursts. But, as most people think it does not rain all day. The rainshower mostly occurs during the night. There is still plenty of sunshine and opportunities for exploration. The average temperature remains between 27 degrees Celsius to 29 degrees celsius. You can explore the nearby islands to the east of Phuket like Koh Yao Noi and Coral Island.

Why Visit– The hotel rates and tourist crowd is at its lowest. You can easily save up to 50% on your travel expenditures as compared to the peak season.

Suggested Read: Places To Visit & Things To Do in Phuket in August 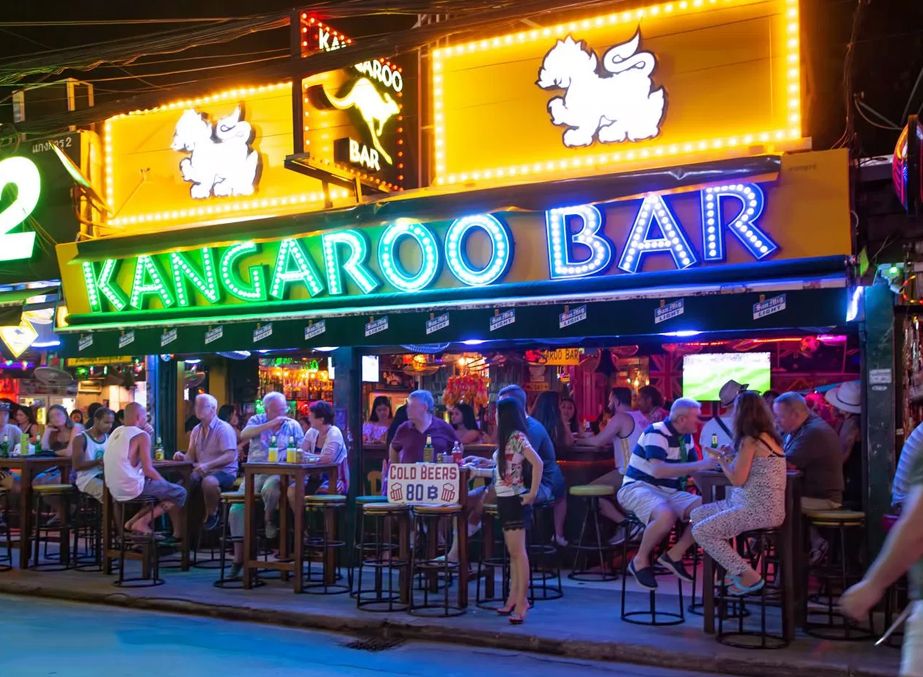 Weather– September happens to be one of the wettest months of the year. But, the rain mostly occurs during the evening. The average temperature can fall as low as 27 degrees celsius. The humidity remains around 77%. You can still enjoy the morning sightseeing and nights at the bar. If looking forward to a beachy vacation then this month might not be ideal.

Why Visit– Best for low-budget vacations. You can easily stay at the luxurious resorts at unbelievably low prices.

Suggested Read: Places To Visit & Things To Do in Phuket in September 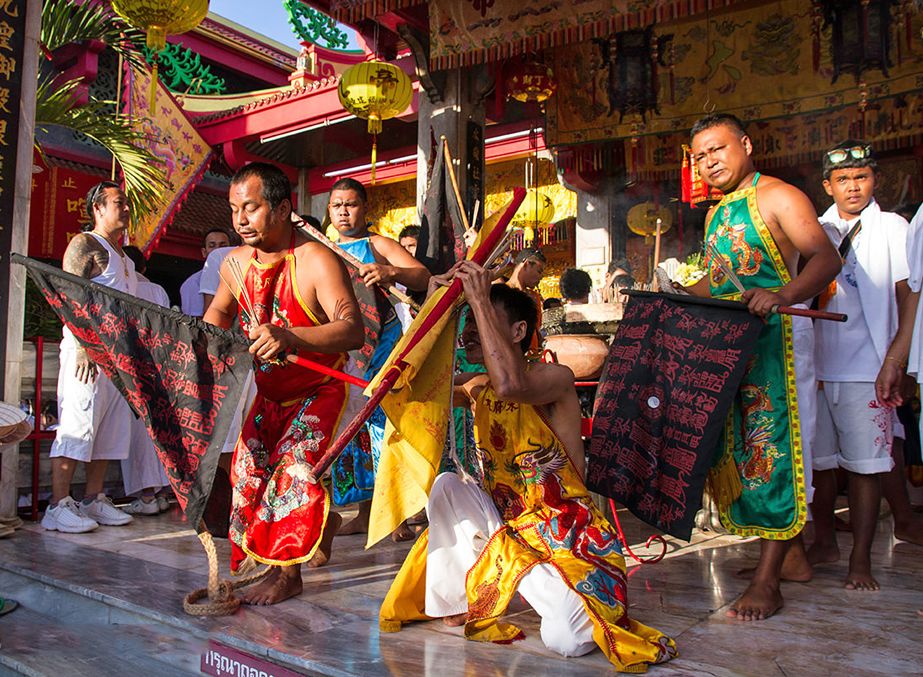 Weather– October is the tail-end of wet and off-season. Phuket sees the maximum amount of rainfall after September. Rainfall is intense but lasts an hour or two. Weather conditions are a bit unpredictable but still, you will have sunny days to go sightseeing. The humidity remains around 77% and the temperature ranges between 24 degrees to 30 degrees celsius.

Why Visit– A good time for surfers and sailors. There are some great discounts on hotel prices. Phuket Vegetarian Festival takes place in October and lasts for 9 days.

Suggested Read: Places To Visit & Things To Do in Phuket in October 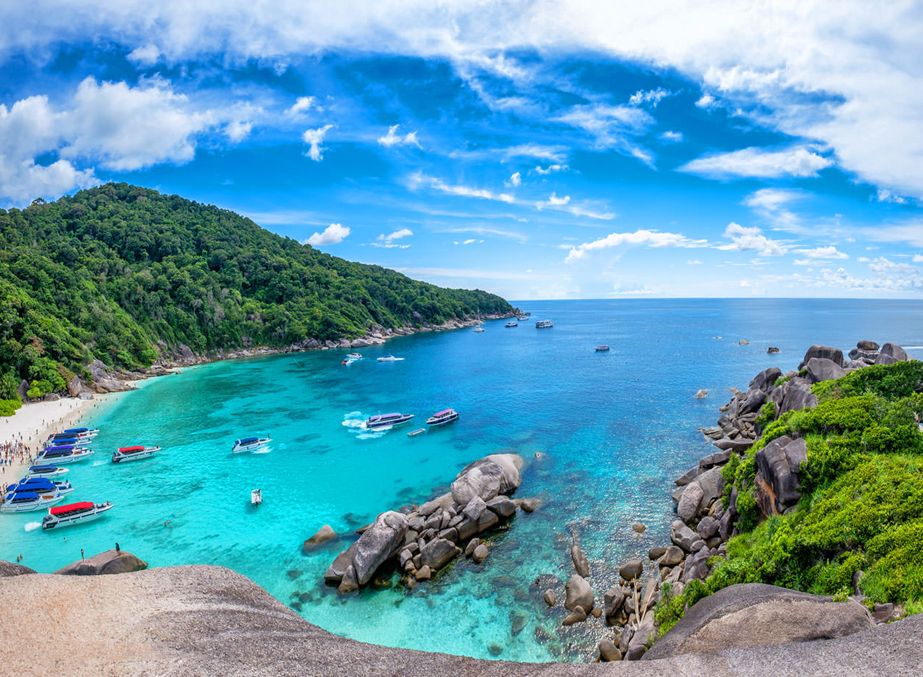 Weather– November is officially the end of monsoon. The beginning of the month might see some downpour but the latter part of the month is almost completely dry. The temperature ranges between 24 degrees Celsius to 29 degrees celsius. The sea begins to calm but the water remains a bit cold. The humidity level drops to 72%.

Why Visit– It is a good time to enjoy great weather with minimal crowd. Similan Islands reopen after the monsoon season and also the nightlife begins to pick up the pace with the gradual increase in the tourist population. Loy Krathong also falls in November.

Suggested Read: Places To Visit & Things To Do in Phuket in November 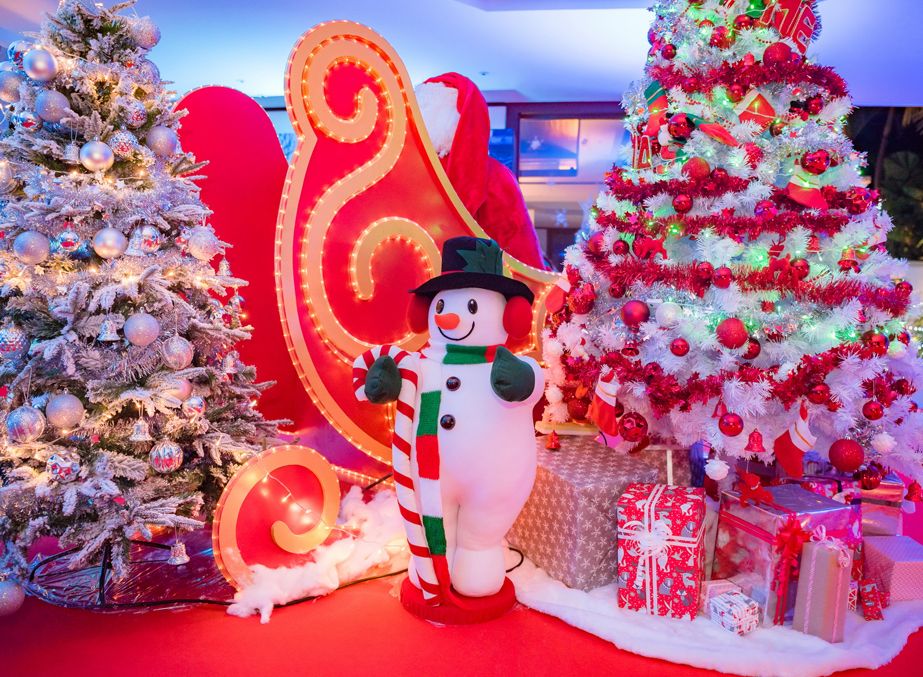 Weather– December is the start of the peak season. The tourist’s footfall starts increasing which means accommodation and flight rates start to peak. Best to book your travel at least 3 months in advance. December hardly sees any downpour. The temperature ranges between 23 degrees Celsius to 31 degrees celsius. Humidity falls to about 63%.

Why Visit– All water sports activities are open to tourists. Nightlife is in full swing as the New Year approaches. Christmas and The New Year is celebrated with great enthusiasm.

Suggested Read: Places To Visit & Things To Do in Phuket in December